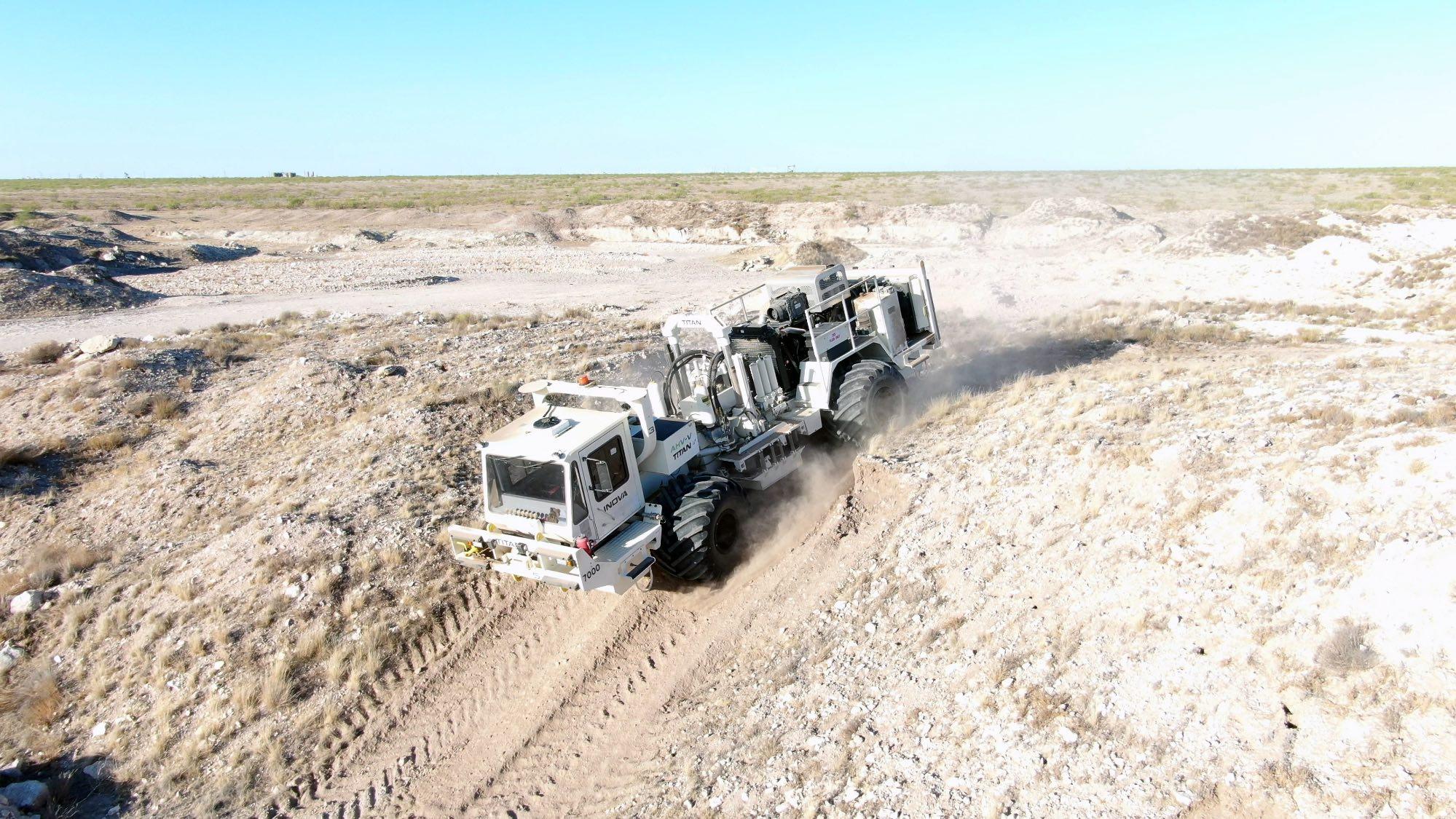 The new AHV-V Titan takes advantage of decades of engineering and manufacturing experience and builds on the features that have made vibroseis a success while enhancing the features that will result in better geophysical performance. Enhanced low frequency, higher fidelity signal transmission and lower radiated noise signature combined make INOVA’s Titan the most technologically advanced vibroseis in the market.

In the last 10 years, the seismic industry has become increasingly interested in the low frequency performance of the hydraulic vibroseis. Vibroseis innovations have dramatically improved the performance of the vibroseis vehicle and the fidelity of the generated signal in comparison to the technology that was available in the early 2000’s and 1990’s. INOVA’s Titan AHV-V 480 is the culmination of the research and engineering innovations that have led to a new generation of high fidelity vibroseis. Many of the technical innovations of Titan are based on decades of experience in engineering and manufacturing of the leading vibroseis in the world. This article will discuss the innovations that make Titan the most advanced large vibroseis in the world and present some of the improvements that are being considered for the future.

AHV stands for, articulated hydraulic vehicle, and was a technology originally developed by Conoco and later commercialized by Western Geophysical and others. The AHV line of vibroseis progressed rapidly when purchased by Input/Output in the 1990’s. While the fundamental buggy of the AHV design has minimally changed, the core of the vibroseis system continued to advance with improved engineering methods that delivered the AHV-IV PLS-380 and PLS-364 in 2006 and 2009, respectively. In 2010, the vibroseis technology became part of the INOVA® family of products and INOVA has since delivered many hundreds of AHV-IV vibroseis units to the market that are still in use today.

INOVA introduced new vibroseis technology with the very popular UniVib and its predecessor UniVib2, a smaller sized vibroseis of 26,000 and 34,000 pounds max weight; and the newest large vibroseis, the AHV-V Titan, an 80,000-pound giant (figure1). Both the UniVib2 and the Titan represent the accumulative technology and experience gained from 50-60 years of vibroseis development, which has been engineered and applied in nearly all regions and environments of the world.

The core of the vibroseis system is called the actuator. This system is comprised of a hydraulic portion, a series of valves and a heavy mass connected to a baseplate that couples with the earth. This system is controlled by electronics driving the valve system to reproduce a time domain sweep with exacting precision. The interaction of all these critical elements of the actuator can influence the fidelity of the force profile that is radiated into the earth.

Early modeling efforts demonstrated that the baseplate is a critical element in transmitting force correctly. It was shown that when a sweep is executed in the field, the baseplate of the vibroseis would flex. This flex of the baseplate results in loss of radiated energy and distortion of the signal. Subsequent to this understanding, the AHV-IV 364 baseplate was designed to be approximately 2.5 stiffer than previous baseplates on older models. This enhancement alone improved the fidelity of the vibroseis by a substantial degree. Other issues recognized at the same time related to the stability of the hydraulic system. Older style vibroseis showed that the hydraulic pressure would flutter rapidly while sweeping. This issue was also improved in the AHV-IV version of the units that resulted in a dramatic improvement of the high frequency force output. The stabilization of the hydraulic pressure reduced the distortion of the vibroseis at higher frequencies.

When the design for Titan was first conceived, it primarily focused on two main goals. The first goal was to improve the low frequency force profile of the vibroseis, and the second was to maintain and enhance any previous fundamental improvements that had been achieved earlier.

Low frequency performance improvement can only be accomplished by examining the fundamentals of physics. Newton’s second law shows us that force is a function of mass and acceleration. Increasing the mass substantially would be difficult in a mobile vehicle that is already very heavy, but acceleration can be increased with a longer mass-stroke. The mass-stroke of the Titan is 17.78cm, nearly twice the mass-stroke of older generation vibroseis. The increased stroke of Titan results in a substantial increase in radiated force output in the 1-7Hz range. (Figure 2)

The second goal was to continue to enhance the stiffness of the baseplate. This is accomplished by further strengthening the structure of the baseplate and by adding additional isolating airbags to the hold-down structure. The Titan vibroseis has 12 airbags that evenly distribute hold-down weight across the surface of the baseplate resulting in an enhanced resistance to flexation. Enhancements to the hydraulic system that increased the hydraulic flow volume and made the hydraulic system react faster were made to support the mechanical changes. The result is a new vibroseis with substantially enhanced low-frequency-force output that takes advantage of a long history of technical innovations and improvements.

When a vibroseis operates, it radiates load noise. Older generation vibroseis can radiate over 100dB of audible noise. This noise generates ground motion that is recorded in deployed sensors, even in the case when the sensors are buried. The primary source of audible noise on a vibroseis is the cooling fans that regulate the temperature of the hydraulic fluid. The cooling fans on Titan were designed to reduce the radiated audible noise. Field experiments (Figure 3) have demonstrated that Titan is as much as 17dB quieter than older generation vibroseis. These results will substantially lower the noise recorded in the sensors and further improve the recorded results when crews are sweeping with Titan.

During the same period that Titan was being developed, INOVA began designing custom sweeps with the intention of enhancing the low frequency force output of the vibroseis. Sometimes called low-dwell sweeps, a sweep is designed that matches the low frequency force profile of an individual vibroseis and includes extending the dwell period of this sweep in duration (Figure 4). The results are complex sweeps that have a non-linear portion and linear portion with a transition time. Custom low dwell sweeps that enhance low frequency output are now common in many regions of the world, because they have been shown to increase the low frequency content of the recorded data. 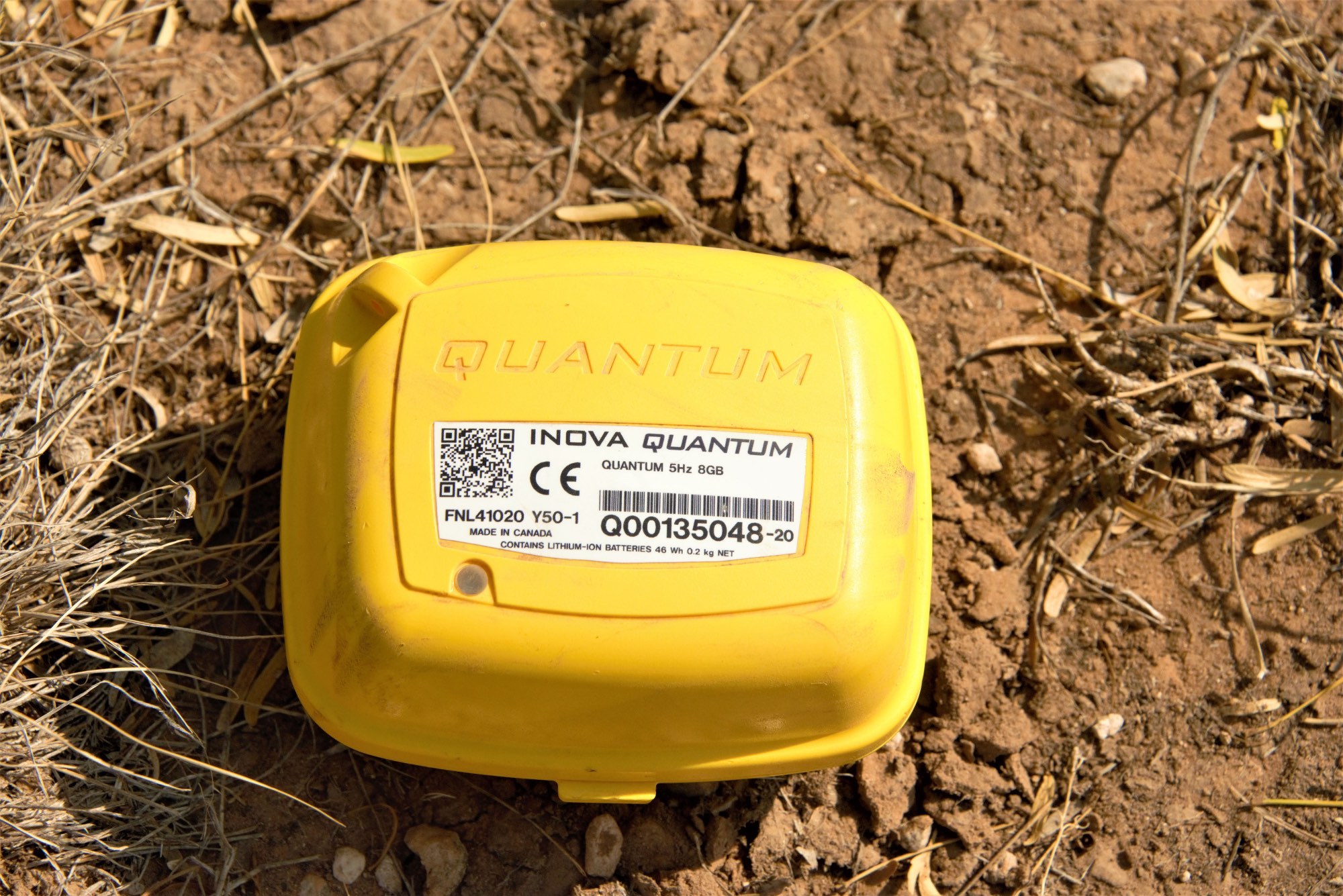