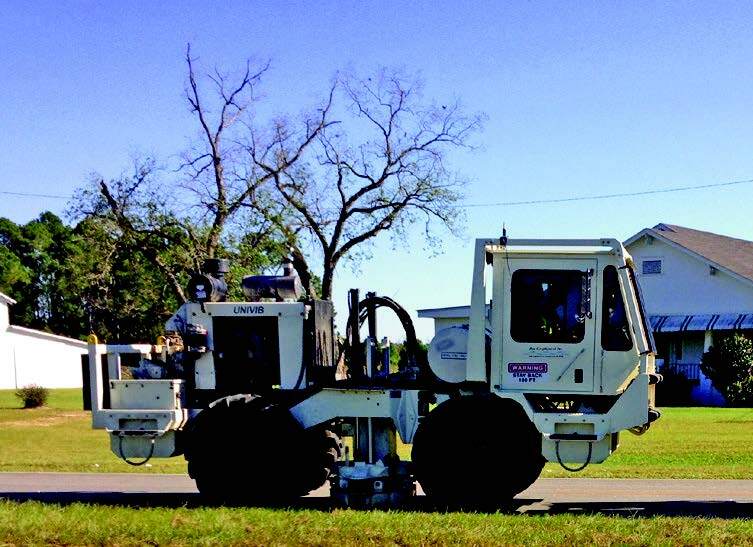 The University of South Carolina (USC) and its research partners were commissioned by the US Department of Energy (DOE) to conduct a reconnaissance project in late 2013 to acquire data for a deep target of Jurassic/Triassic sediments within the South Georgia Rift Basin. The data was needed to help evaluate the feasibility of CO₂ storage in the basin formations over 4,500 meters (14,765 ft) beneath the surface. The project is part of DOE’s effort to develop a national assessment of CO₂storage capacity in geologic formations. USC contracted Bay Geophysical Inc., an experienced seismic service provider based in Michigan, to acquire 81 km of 2D seismic data for exploration of the southern Georgia basin. The survey consisted of two intersecting lines approximately 40.5 km in length. One line was designed to intersect a deep well (GGS-3457) drilled for oil and gas exploration in the 1980s that had usable well logs suitable for the project. The university's objectives were to establish a reliable well log tie with the seismic data, extrapolate information away from the well to maximize the extent of coverage, and better define the span of the basin. Getting an adequate image at depth was critical for geological characterization with identification of reflectors, faults, and structures to help assess the reservoir and caprock as a candidate for successful injection of CO₂ for permanent sequestration. The major challenge of any survey with extremely deep targets is generating enough source energy for maximum depth penetration across a broad frequency spectrum. Bay Geophysical and USC researchers required a robust vibrator capable of generating high energy-force that can easily maneuver through Georgia's urban and agriculturally sensitive areas. The regional seismic lines traversed across Georgia’s diverse terrain that encompassed heavily wooded areas, vineyards, orchards, crop lands, and mountainous regions. Bay Geophysical realized a lighter and more agile vibrator would provide enough accessibility with minimal impact to the environment. Crews would also need to operate the equipment safely through narrow mountain roadways while facing poor road conditions.

Bay Geophysical and their research partners chose INOVA’s UNIVIB vibrators as the energy source a cableless acquisition system, and analog geophones to conduct the 2D survey. The best in class small-scale vibrator can generate up to 26,000 lbs peak ground force. With a frequency output capability from 1-400 Hz, the UNIVIB can easily perform the project's linear sweep parameters. The UNIVIB was an ideal choice for strong signal generation to image reflectors at those deep targets and overcome Georgia's environmental restrictions. Bay Geophysical had extensive experience in utilizing the UNIVIB on prior acquisition projects in the US. They had concluded that the UNIVIBs were a better choice over four large-scale vibes in producing high-quality data. Factors such as a smaller footprint, stiffer base plate, excellent source signature consistency, and lower vehicle ground pressure offered clear advantages of using the UNIVIB.

The data quality at depth surpassed all expectations with usable reflectors down to 4,500 meters (14,765 ft). South Carolina researchers commented that the two UNIVIBs delivered the same or better frequencies at the same depth penetration as three larger vibes to produce superior data. Encouraged with the processing results, Professor Waddell at the University of South Carolina noted excellent well ties to seismic data. The two intersecting 2D seismic lines also showed good ties to each other, an indication of quality and consistency. Dominant frequency of the data is approximately 40 Hz. The analysis also shows southward dipping reflectors at depth, with characteristics of a fault to the north. Factors apparent in the structural complexity of the region will require further interpretation to help evaluate the basin's deep formations. During acquisition operations, the UNIVIB performed with great reliability and flexibility. Bay Geophysical successfully completed the project without any equipment downtime and was pleased with the ease of operating the smaller vibrators. The maneuverability of the UNIVIB was a key factor in solving accessibility issues in the vineyards, woodlands, and other areas; the small footprint and lower ground pressure translated to 30% less crop damage. Results strongly indicated the success of the UNIVIB’s effectiveness as a small energy source capable of penetrating great depth while overcoming the environmental challenges of source operations in sensitive areas. Based on the positive outcome of this project, USC and DOE met their research objectives in collecting more information about the South Georgia Rift Basin in order to determine if the deep formations are a viable place to safely store CO₂. 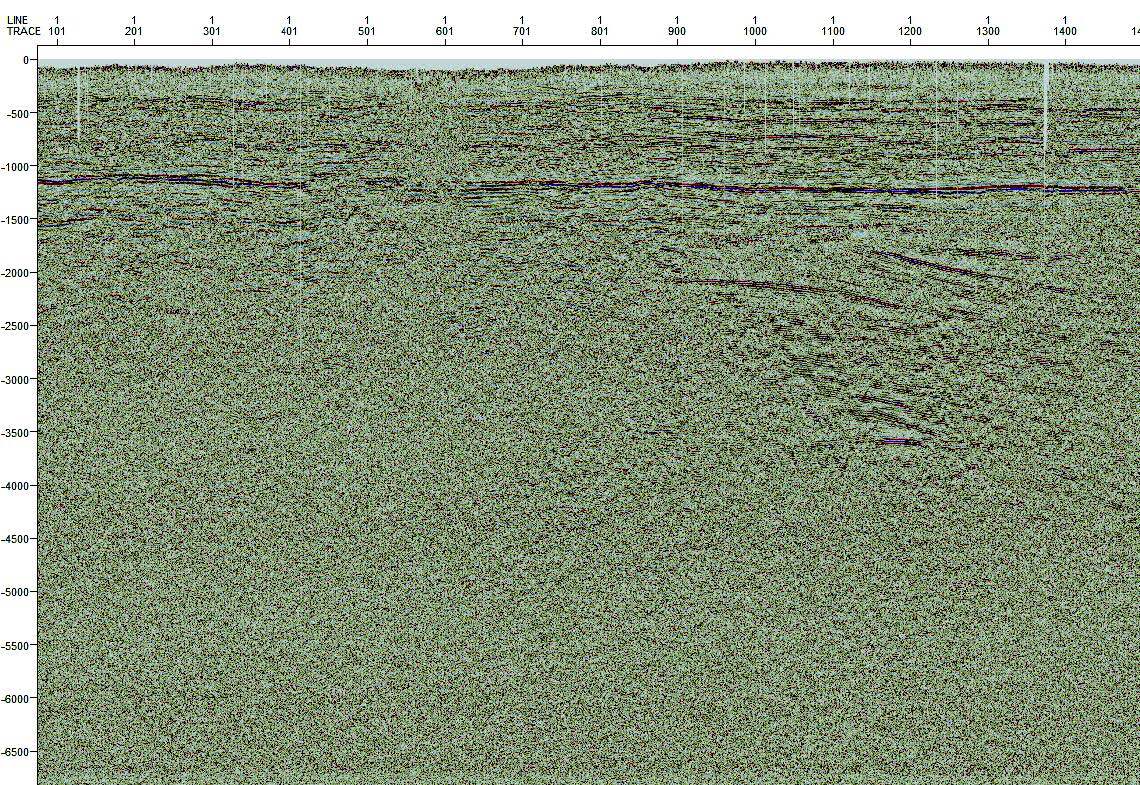 The red circle highlights some southward dipping reflections that are bounded to the north by a dashed yellow line which potentially could be a fault. Close up view of the red circle is found below. 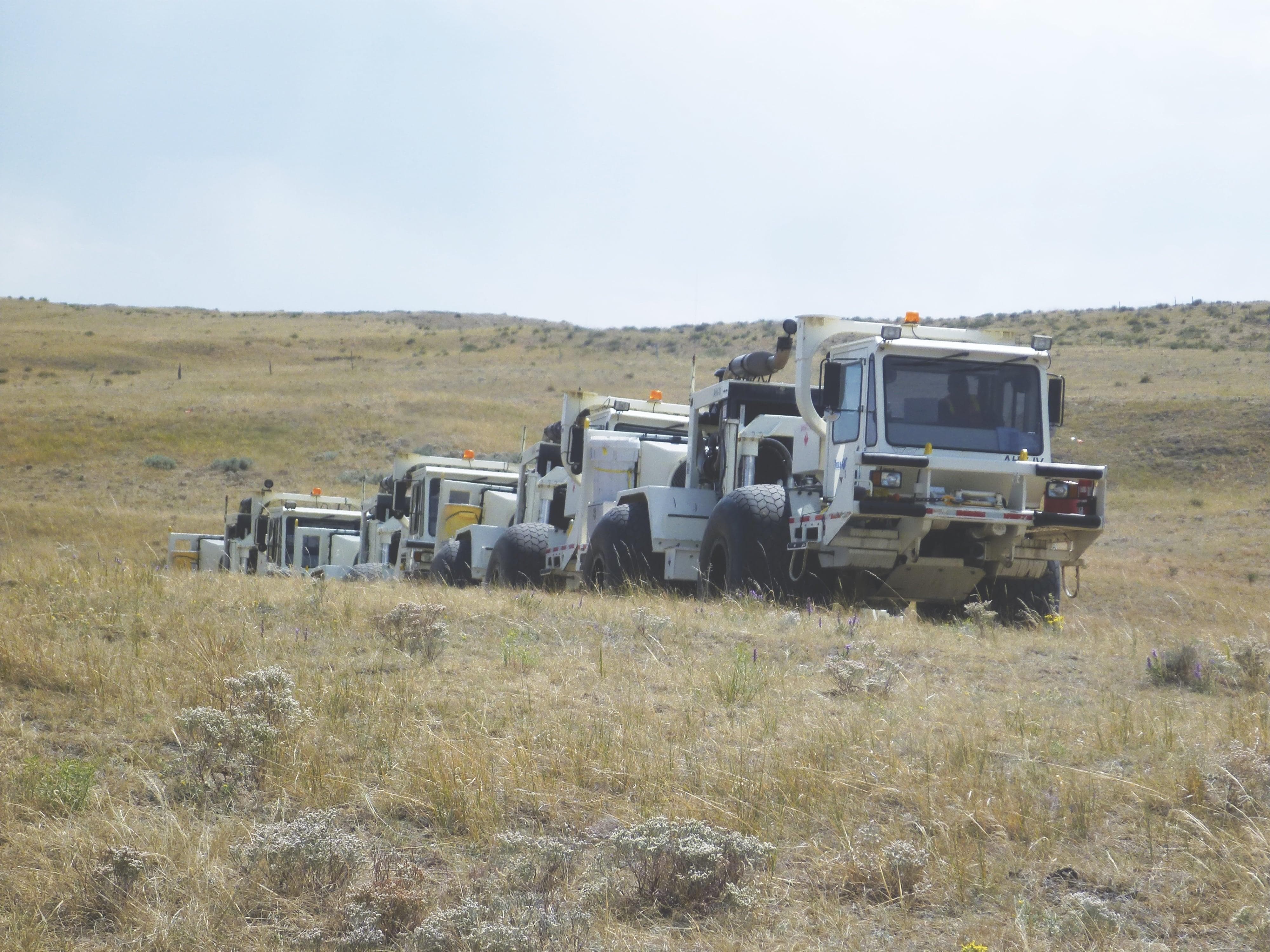